at the make sense academy, we made [non]sense our science. and we called it sensology.

like most scientific matters, it is born out of research, observation and experimentation – constantly questioning itself and adapting to its changing environment. we analyze behaviors. we uncover the whys that most would rather ignore or call crazy. we find reason where there doesn’t always seem to be any. and turn it into models, theories, and snackable treats – like our blog.

still, defining what makes sense and what doesn’t is a very complicated matter. it’s usually subjective. it’s culturally tuned. It’s context-dependent. and it’s often very personal. what makes sense to one person or even to a group in a given environment, might not to others. it might not even make sense to the same people in a different setting. or what seemed so irrational 10 years ago, makes perfect sense right now. sounds familiar?

what feels “logical” is often based on past experiences, acquired knowledge, personal preferences, or unwritten social conventions. and it’s only when all those overlap that something can make sense. that’s why we placed sensology at the intersection of three foundational sciences: neuroscience, psychology, and cultural sociology. each of which defines a subset of conditions that need to be met for something to make sense.

any or all of the sciences, such as neurochemistry and experimental psychology, which deal with the structure or function of the nervous system and brain.

to understand humans, one needs to look at what makes them tick. which means you’ll need to know more about the place where decisions are taken: the brain – and the way it gets all our sensorial stimulations through the filters of its three driving forces: instinct, emotions, and reason. neuroscience helps us understand how our central nervous system deals with information. almost like a very well oiled and trained machine with usually one very simple task: keeping us alive.

so, as the brain develops and synaptic connections are created or destroyed, one can process more or less information. when you’re younger, new connections are rapidly created, getting your brain to starve for sensorial stimulations, pushing you to try new things all the time (which then appears weird and wild to older people – right?). and as you grow older past 25-30 years old, more connections are destroyed than created, and nerve endings get less sensitive. looking something like this.

this graph is showing an average estimation though. people that train their brain and have a healthy lifestyle can make the top of the curve flatter, for longer.

definition (Oxford Dictionaries)
the scientific study of the human mind and its functions, especially those affecting behavior in a given context.

biology is only one part of the full human decision-making spectrum. another important building block resides in putting things into context, and how our past experiences have conditioned us to act or react in specific ways.

over time, as we learn more and more through different experiences, we add to our knowledge database, tweak our behavior with new information and perspectives, and overall become wiser. but there is only so much newness and change we can cope with. so, very often, we accumulate most of it in the first part of our lifetime. making it look something like this. 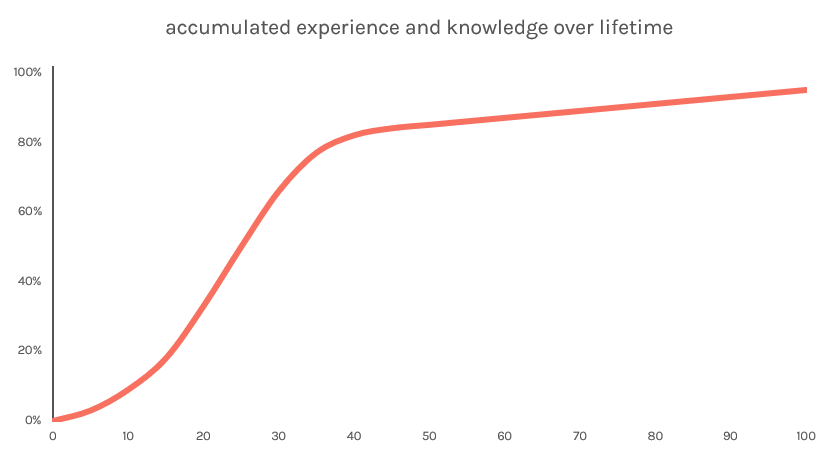 once more, this graph is showing an average estimation. someone who lives through more experiences than others, especially if those happen in a variety of different contexts, would also boost the curve up.

definition (Merriam-Webster dictionary)
the sociological study of the historical processes involved in cultural phenomena (such as art, philosophy, and religion).

while what makes sense is highly dependent on our internal processes, a lot of it also relies on the outside world and how in sync we are with it (e.g. social conventions, group dynamics, cultural codes). for example, it is normal for teenagers to feel like “the world is against them” as a lot of societal rules are being forced on them, while they have almost no power to influence it. and it will usually be so until they grow older and become part of the active society that sets the norm. until they are the ones directly shaping society. before they keep growing older and don’t anymore. which makes it look like this. here again, this curve can lift up for someone who travels a lot, understanding their own culture better in the process, someone who speaks more than one language, or someone who understands better the impact of group dynamics having worked in various teams for example.

as you overlap these three curves, you get a model that shows that, for most people, there is no point in our life where the world would fully make sense. there is always something off – even if just slightly. as said above, the top of the curve can go higher for people who travel a lot, train their brain, go through more impactful life experiences, etc. but it will mostly remain a bell curve. this curve is based on average data for one single individual over their lifetime. what is interesting – and slightly mind-bending – is to use this curve to imagine if your 40-year old self could meet with your 15-year old and your 80-year old selves. it can explain why, even if you are literally talking to yourself, what each of those three selves say and think might not make sense to the others. just remember who you were, where you were, and what you were doing 10 years ago. were you the same person? were your thoughts the same? were you behaving the same way? most probably not. and I bet you can remember specific moments where you would think of yourself as silly, irrational or just awkward. which is totally normal. especially if what we just went through makes sense to you too.

this model is based on how three different dimensions of who you are overlap – or do not. in the case of your three selves (teenager you, grown-up you and senior you), here is what the overlap could look like.

your young self
15 years old your grown-up self
40 years old 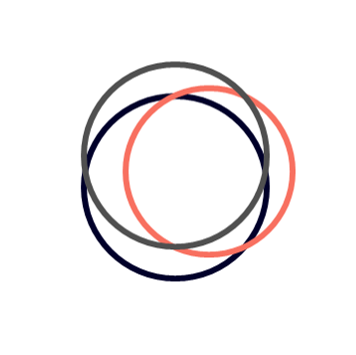 your senior self
80 years old as you can see, the sizes of the circles change, which impacts where and how they overlap. but also which dimension could weigh in the most in explaining why something makes sense or not. to the teenager, it could make more sense because it just “feels better” (engaging the nervous system more intensely). to the grown-up, it makes sense because it has always made sense that way (as part of the cultural and societal conventions). to the senior, because he went through the same ordeal before and the result was the same (psychologically sound).
still, while these show a model based on a “regular” life experience, you can imagine that the size of each circle would be very different if you only just moved to another culture (say moving from the US to China), if you’ve lived a secluded life, went through a trauma, or suffer from a neurological condition. and since one person is not the next, these circles and overlaps will vary. still, we believe this model explains why some things can make sense to some people, while they might not to others. or why some things made less sense to you when were younger, then they do now.

and this is only the tip of the iceberg. another aspect of this research is to identify what is shaped by different experiences or environments, and what is universal. what every human can make sense of, and what could cause for something not to.

at the make sense academy, we’ve traveled. we come from different countries. we’ve lived in cultures different than our own. we each speak at least three languages fluently, and have learned the basics of several other languages. we are in our thirties. we keep reading, listening and learning – testing ourselves, challenging our own thoughts by constantly confronting them to other perspectives. we’ve worked for and with corporations, small businesses, startups, NGOs and individuals from everywhere in the world. we love art and philosophy – and we love hating them too. this means that, according to the model, we’re at the top of a very high bell curve.

so… what do you think? shall we go make some sense, together?